With a motto “Louder than Silence”, the Centre for Civic Education (CCE) organised during December the XIII edition of the FAST FORWARD Human Rights Film Festival Montenegro 2022 in Podgorica, Kotor and Berane.

As in previous editions, the FAST FORWARD Festival brought 14 premiere films of exceptional quality and the latest productions with a strong human rights dimension, which have already managed to receive nominations and awards at prestigious regional, European and worldwide festivals. In addition to the film screenings, an accompanying programme was realized, in the form of panel discussions, through which a reflection was made on the messages of certain films, but also some of the burning issues in the field of human rights in Montenegro were addressed.

The FAST FORWARD Festival was traditionally opened on International Human Rights Day, at the Music Centre in Podgorica, with the regional premiere of the film THE SON by the French writer and director Florian Zeller, by which the CCE also marked 20 years of its work. The executive director of the CCE, Daliborka Uljarević, reflected on the two decades of the CCE’s work in her speech at the opening and presented the award of the FAST FORWARD Festival and CCE for the affirmation of human rights and civic activism to lawyer Sinisa Gazivoda.

The film programme also included documentaries produced within the framework of the IPA Interreg Italy-Albania-Montenegro programme “RECON”- LEMONS & ORANGES by Enxhi Noni; WHY SO, by Una Jovović,  A POEM A DAY KEEPS A WAR AT BAY, by Tamara Pavićević; and THE ECHO OR THE HERO’S JOURNEY, by Dario Haruni. 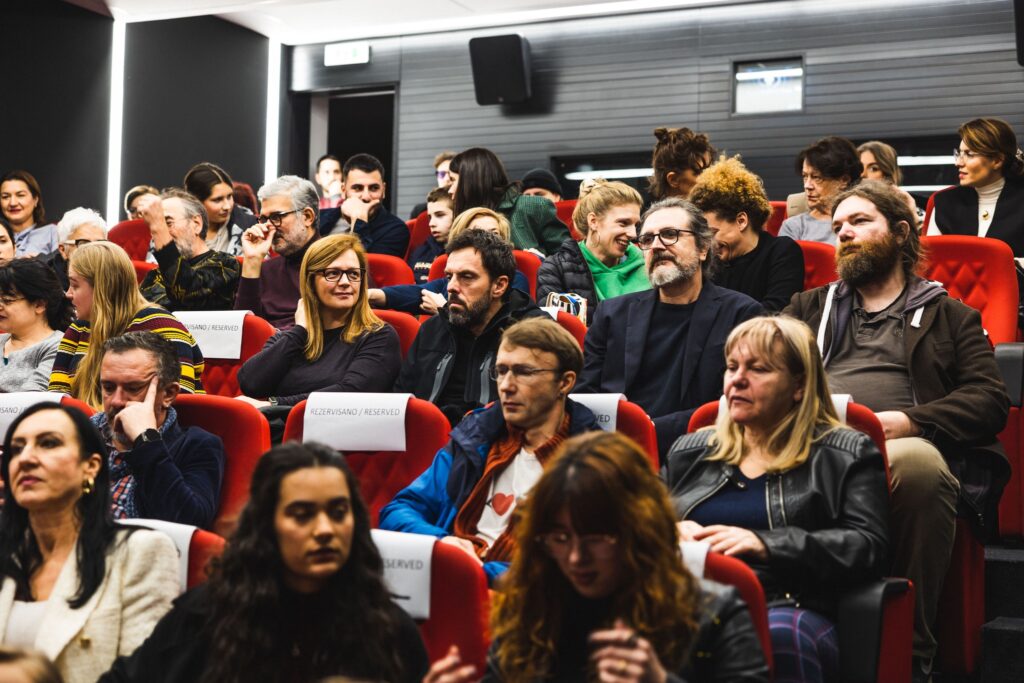 This year’s programme had a significant focus on issues of media freedom and boundaries in the context of respect for other human rights, and in that section, there were screenings of F@CK THIS JOB, by Vera Krichevskaya; WRITING WITH FIRE, by a Rintu Thomasa and Sushmit Ghosha; and NO PARDON, by Aleksandar Reljić, who was guest at the FAST FORWARD Festival.

MY IMAGINARY COUNTRY, the creation of the Chilean director Patricio Guzmán, came to FAST FORWARD with a nomination from the Cannes Festival in the Golden Eye category, especially making happy the loyal audience of the FAST FORWARD Festival who had the opportunity to see Guzmán’s works before.

FAST FORWARD 2022 emphasized the pressing issues of the position of women, and in that programme segment the audience had the opportunity to watch a Montenegrin documentary ŠEJLA, by Velibor Čović, the award-winning film CORSAGE by the Austrian director Maria Kreutzer, the first author’s film of the famous Croatian actress Lana Barić SNOW WHITE, the film GENTLE, by Hungarian authors Anna Nemes and Lászlo Csuje, as well as  A PLEIN TEMPS, by french director Eric Gravel, which closed the FAST FORWARD Festival 2022. 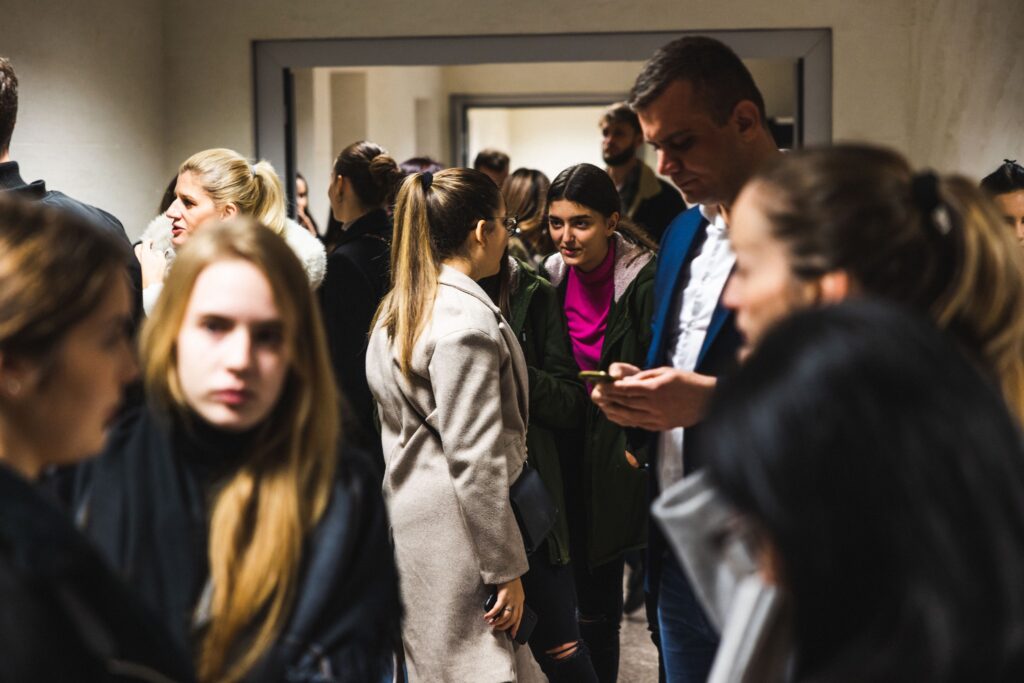 Within this edition, the CCE tried to contribute to the strengthening of awareness of the importance of human rights, to stimulate the audience to get out of their comfort zone and face new and challenging realities, and to identify, even briefly, with the fate and lives of the most diverse individuals and communities. The mission of the FAST FORWARD Festival is recognized by its already formed audience, as well as by the new audience that attended the screenings for the first time this year, which is a strong encouragement for further efforts in the organization of this unique festival in Montenegro.

This year’s edition of the festival was supported by the Ministry of Economic Development, the Ministry of Human and Minority Rights, municipalities Kotor and Berane, Cultural Centre „Nikola Đurković and Cultural Centre Berane. Partners were BELDOCS, Sarajevo Film Festival, Human Rights Film Network and Montenegrin Cinematheque. Also, the promotion of a socially responsible approach is expressed through sponsorships of hotel Cue, Gostiona 1928, PG taxi and Companie De Vinos Montenegro. 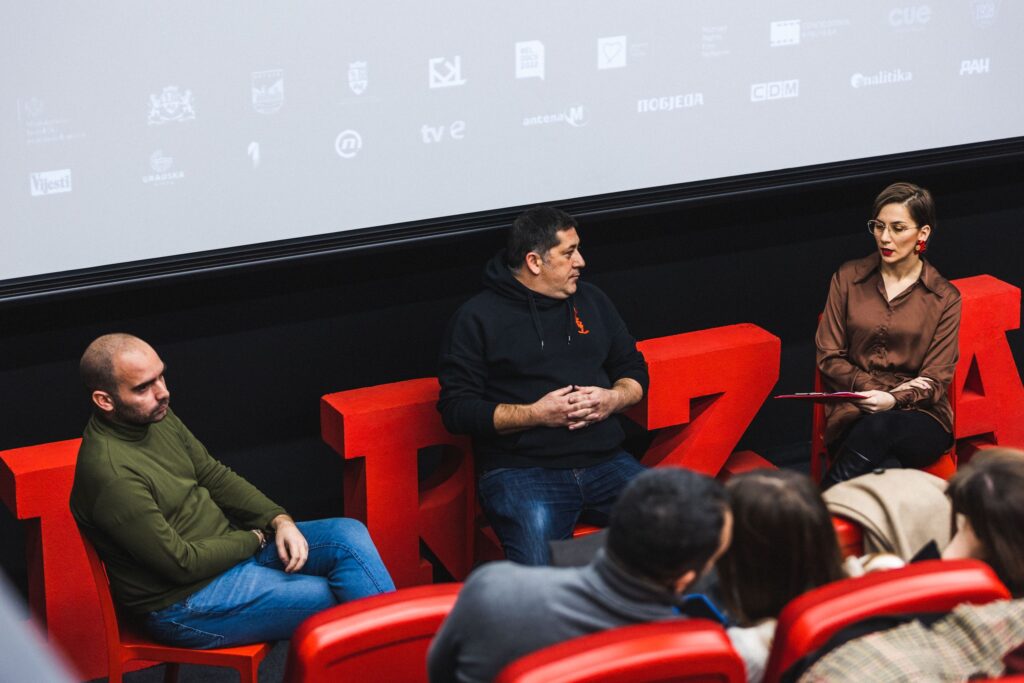