’We would like to have left far behind and long ago the obstinate ghosts of fascism, slavery, poverty, exploitation, disease and war. Maybe we could have done so, but we did not. They are our present too, and our reality. This is what the films of the ninth selection of the FAST FORWARD 2018 Human Rights Film Festival are telling us, each in its own way. These films are not afraid: with courage and imagination they cut to the quick of social injustices, mock the powerful and dream aloud. Films that fight and in which people fight’, Paula Petricevic of the FAST FORWARD 2018 Festival’s team has stated in the introduction. Therefore, the moto of this year’s Festival is WATCH AND REMEMBER, and it brings 15 premieres to Montenegro. 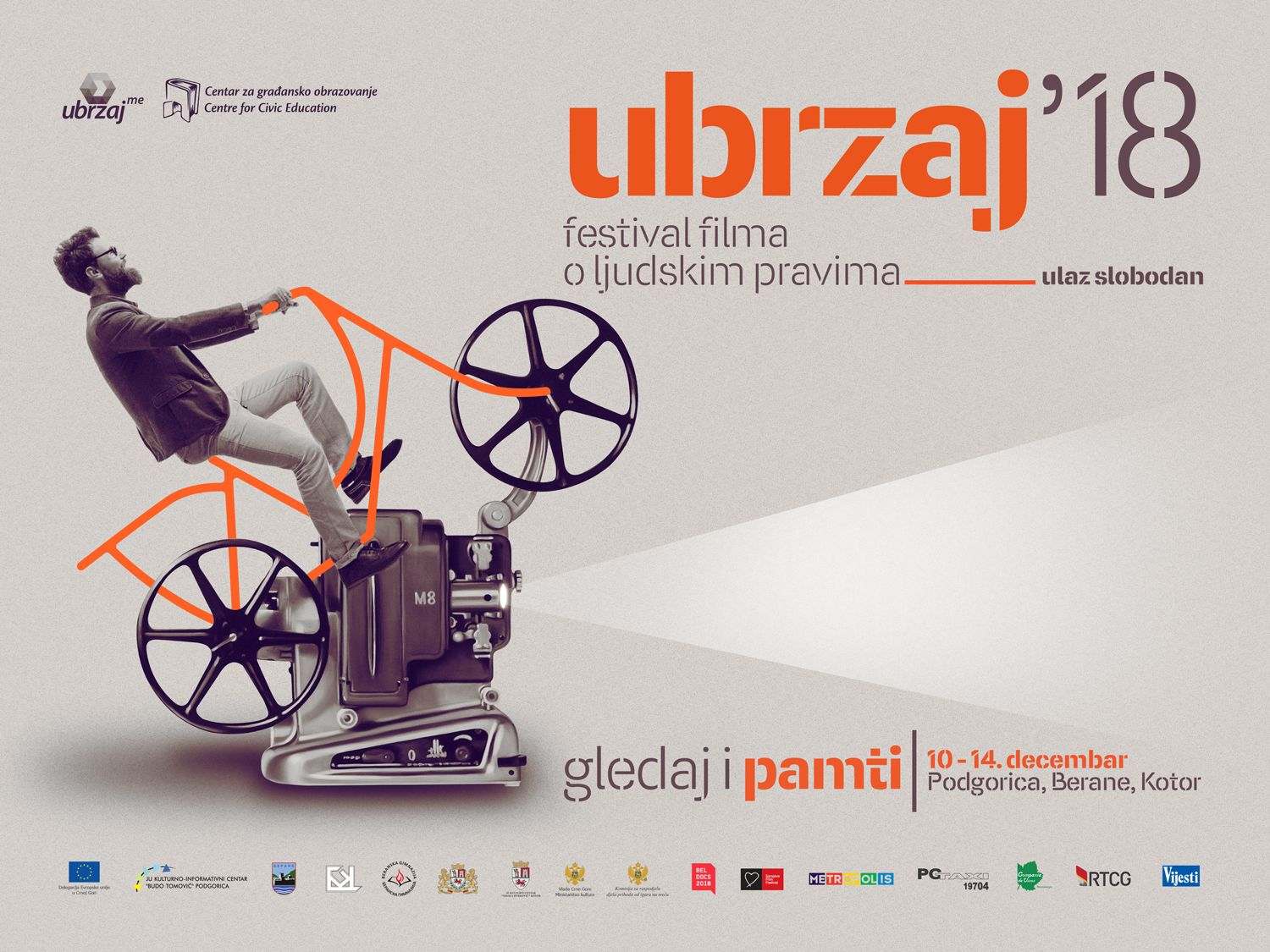 FAST FORWARD begins on 19 December on the International Day of Human Rights, and two films will be screened in Podgorica. From 17:30h, as introduction to ceremonious opening, an informative and humorous documentary film Louder Than Guns, by Croatian director Miroslav Sikavica will be screened on Grand Scene of CIC ’Budo Tomovic’, which speaks about role of music in the war of 90ies in Croatia, and is considered to be the best Croatian film of this kind in last several years.

At the ceremonious opening of the FAST FORWARD Festival 2018, from 19h30, speakers will be Aleksandar Bogdanovic, Minister of Culture in Government of Montenegro, Aivo Orav, Head of EU Delegation to Montenegro and Daliborka Uljarevic, Executive Director of the CCE. On this occasion, for a fifth jubilee time, annual rewords for affirmation of human rights and civic activism will be awarded with the objective of contributing, in this manner as well, to recognition and strengthening of those who give themselves selflessly in efforts to make the Montenegrin society better and for the universality of human rights not to be questioned in it.

Afterwards, there is screening of the film The Eighth Commissioner, by Ivan Salaj which is this year’s Croatian candidate for prestigious Oscar award and winner of five Golden Arenas on Pula Film Festival.

On Tuesday 11 December, four films will be screened in the ’Dodest’ hall of CIC ’Budo Tomovic’ as follows – at 15h00 film Dark Shadow of Green Energy by Dragan Gmizic, who will be the guest of the FAST FORWARD 2018 Festival, and who seeks to reveal, by the means of his film, how did the regional plan of mass production of small hydroelectric power plants bring numerous new problems instead of a solution. Then, at 17h00 there is a Hungarian film A Woman Captured by  Bernadett Tuza-Ritter which exposes a shocking occurrence of modern slavery in contemporary society, in the heart of Europe, through a fate of protagonist Marish who lives as a slave of one Hungarian family for more than a decade. At 18h45 there is the winner of Berlinale in the category of best feature-length documentary films on the programme – The Waldheim Waltz, by Ruth Beckermann, which deals with the phenomenon of Kurth Waldheim, his Nazi past and despite it, his election for a President of Austria. For the end of the second Festival day, at 20h30 there will be another film screened for the audience in Podgorica, which has had his premiere precisely at the Berlin Festival – Transit, by the most famous and most important contemporary German Director Christian Petzold.

On third Festival day, 12 December, also in the ’Dodest’ hall, there is the newest film achievement on the programme at 17h00 by the multiple times awarded Director Milcho Manchevski – Bikini Moon, a film in which truth and illusion, documentary and fictitious are intertwining, opening a question of how is today’s society, and especially media, influencing the individual.

At 19h00, within the focus on process of dealing with the past, FAST FORWARD 2018 is showing a premiere of a film for the Montenegrin audience Guidance Through the Black Hole by Directors Aleksandar Nikolic and Zlatko Pranjic who is also a guest of the Festival and will Q&A session with audience upon screening. The third day is completed with the film The Heiresses, at 20h30, a debutant feature film of Director Marcelo Martinessi which received more than 30 awards on prestigious world festivals, of which four on this year’s Berlinale among which are also two Silver Bears.

On Thursday, 13 December, screenings in the ’Dodest’ hall will start at 15h00 with documentary film Special Blood by American Director Natalie Metzger which follows a story of five patients with dramatic disease known as hereditary angioedema (HAE). After the screening, the CCE will in cooperation with HAE Montenegro, organise panel discussion in order to familiarise the broader and professional public in Montenegro with this disease. Furthermore, there is film The Raft on the programme at 17h00, by Swedish Director Marcus Lindeen, which brings a hidden story about what was described as ’one of the most unusual group experiments of all times’. At 19h00 there is film Obscuro Barroco by Greek Director Evangelia Kranioti, a fantastic story about gender and desire to transform body, both intimately and socially. At 20h15 there will be screened film Westwood: Punk, Icon, Activist by Director Lorna Tucker, an exciting homage to one of genuine culture icons of our time and her fight to maintain integrity, principle and her heritage in the world guided by consumerism, profit and global expansion.

On the last Festival day in Podgorica, 14 December, there will be two films screened in the ’Dodest’ hall. First, at 18h00 – Our New President by renown Russian director Maxim Pozdorovkin, a satire about Russian media and their view of American politics. FAST FORWARD 2018 concludes this year’s edition with the film Enkel, by Aleksandar Reljic which speaks about former inmate Eva Mozes Kor, who survived deadly Nazi experiments of doctor Josef Mengele, and in 2014 symbolically adopted an Auschwitz commander’s grandson, Rainer Höss. The film’s Director Aleksandar Reljic and the protagonist of film Rainer Höss are guests of this year’s FAST FORWARD Festival and will Q&A session with the audience upon screening.

FAST FORWARD Human Rights Film Festival 2018 will have its parallel editions also in Berane and Kotor. The edition in Berane, will be opened on 11 December at 19h00 by screening of film The Eighth Commissioner. The following day, on 12 December, there will be screened film Enkel, with the beginning at 12h00 in Gymnasium ’Panto Malisic’ after which the pupils will have the opportunity to talk with Director and protagonist of film – Aleksandar Reljic and Rainer Höss. Later that day, the film Dark Shadow of Green Energy will be screened at 17h00 in Centre for Culture, whose Director Dragan Gmizic will also be a guest of Festival in Berane. At 19h00 the Berane audience will have the opportunity to see the Hungarian film A Woman Captured.

In Kotor, in the cinema Boka on 13 December there will be screneed film Enkel accompanied with discussion with Director and protagonist of film – Aleksandar Reljic and Rainer Höss. Film A Woman Captured is on the programme at 21h00. In cinema Boka on 14 December, two films will be screened as well, as follows – Our New President at 18h and The Raft at 19h30.

FAST FORWARD 2018 is being implemented with the support of EU Delegation to Montenegro, Commission for Allocation of Part of Revenues of Games of Chance of Government of Montenegro and Ministry of Culture of Montenegro, as well as companies Metropolis, PG Taxi and Compania de Vinos Montenegro. Partners of Festival are PI CIC ’Budo Tomovic’, BELDOCS, Sarajevo Film Festival, CC ’Nikola Djurkovic from Kotor, Municipality of Kotor, Municipality of Berane, Centre for Culture of Berane and PI Gymnasium ’Panto Malisic’, and media sponsors are public service RTCG(TV and portal) andVijesti (newspapers, portal and television).

Detailed programme of the Festival and all additional information are available at the website http://ubrzaj.me/en/ and the entrance to all screening, in all three cities, is free of charge. The official video of the FAST FORWARD Festival 2018 is available at the link https://youtu.be/4vldv54owE4.