Today’s screening begins at 15:00h in the Dodest hall of CIC ‘Budo Tomovic’.

Film Special Blood by American director Natalie Metzger is on the programme at 15:00h. This is a documentary that follows five patients with a dramatic disease named hereditary angioedema (HAE) as they try to live normal lives while their bodies turn against them. Failed by a healthcare system that is largely ignorant of their existence, they learned to find strength in each other and their small, but strong community. After the screening, the CCE will, in cooperation with the HAE Montenegro, organise panel discussion in order to introduce the broader and the professional public in Montenegro with this disease. 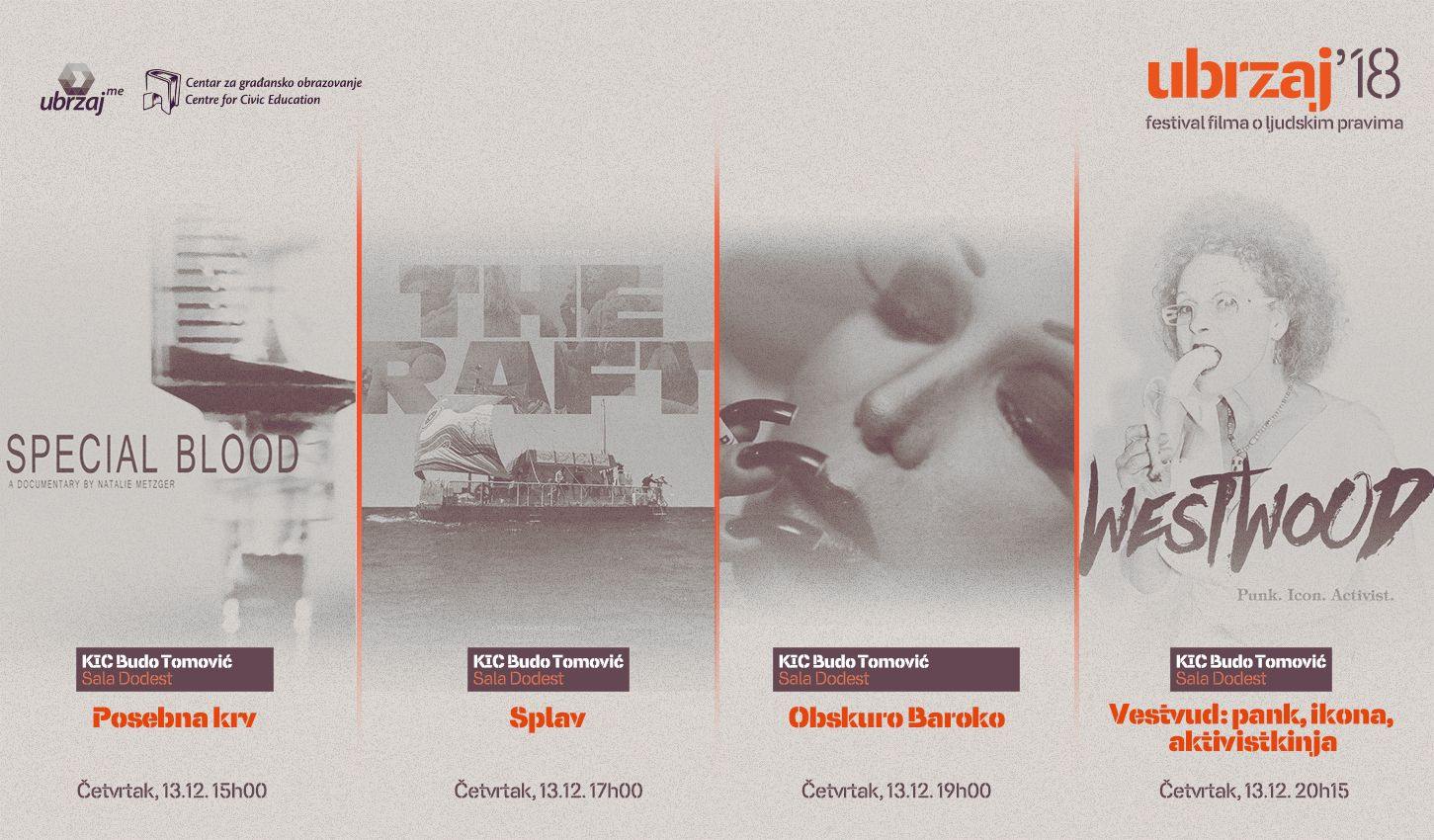 At 17:00h there is a film achievement of Swedish director Marcus Lindeen – The Raft. The documentary reflects on experiment in 1973, when 11 people were on a boat, i.e. raft. Five men and six women are drifted across the Atlantic on a raft as part of a scientific experiment studying the sociology of violence, aggression and sexual attraction in human behaviour. At the end, nobody expected what ultimately took place on that three-month journey. Through extraordinary archive material and a reunion of the surviving members of the expedition on a replica of the raft in original dimensions, this film tells the hidden story behind what has been described as ‘one of the strangest group experiments of all time’. This film is a winner of main award on CPH: DOX 2018, Silver Hugo award for documentary film on Chicago Film Festival 2018, as well as a winner of special award on Athens Film Festival 2018.

At 19:00h there is documentary fiction Obscuro Barroco by Evangelia Kranioti. The documentary brings story about the dizzying heights of gender and metamorphosis. It is also a cinematographic homage to a land of extremes and the city of Rio de Janeiro in Brazil. Following the path of iconic transgender figure Luana Muniz (1961-2017), the film explores different quests for the self through transvestism, sensual and political struggle. In turn, it asks questions about the desire for transformation of the body, both intimate and social.

Westwood: Punk, Icon, Activist by Lorna Tucker, is a last screening at 20:15h, on fourth day of the FAST FORWARD Festival in Podgorica. This is first film to encompass the remarkable story of life of Vivienne Westwood, her personality, her activism and her cultural importance. She is Dame od punk movement, doyen of British fashion and one of most influential creators of trends in recent history. The film researches her raising career and her artistic qualities and activism. Combining archive and beautifully crafted reconstruction material, this intimate story presented through Vivienne’s words and insightful interviews with inner circle of family, friends and collaborators. This is a poignant homage to one of the true cultural icons of our time, as she fights to maintain her integrity, her principles and her legacy in a world driven by consumerism, profit and global expansion.

Simultaneously, tonight in Kotor, in Cinema ’Boka’ the fifth jubilee Kotor’s edition of FAST FORWARD Festival begins at 19:00h which will be opened by Vladimir Jokic, President of Municipality of Kotor, Marija Bernard, Director of Cultural Centre ’Nikola Djurkovic’ and Daliborka Uljarevic, CCE Executive Director. The programme begins with screening of the film Enkel by Aleksandar Reljic. Film speaks about former inmate Eva Mozes Kor, who survived Holocaust and Nazi experiments conducted by doctor Josef Mengele. In 2014, she symbolically adopted an Auschwitz commander’s grandson, Rainer Höss, who today actively fights against fascism and antisemitism. Film director Aleksandar Reljic and protagonist of film Rainer Höss,Auschwitz commander’s grandson, are guests of this year’s FAST FORWARD Festival Kotor and after the film screening, they will have Q&A session with audience, with moderation of Milos Vukanovic, historian. 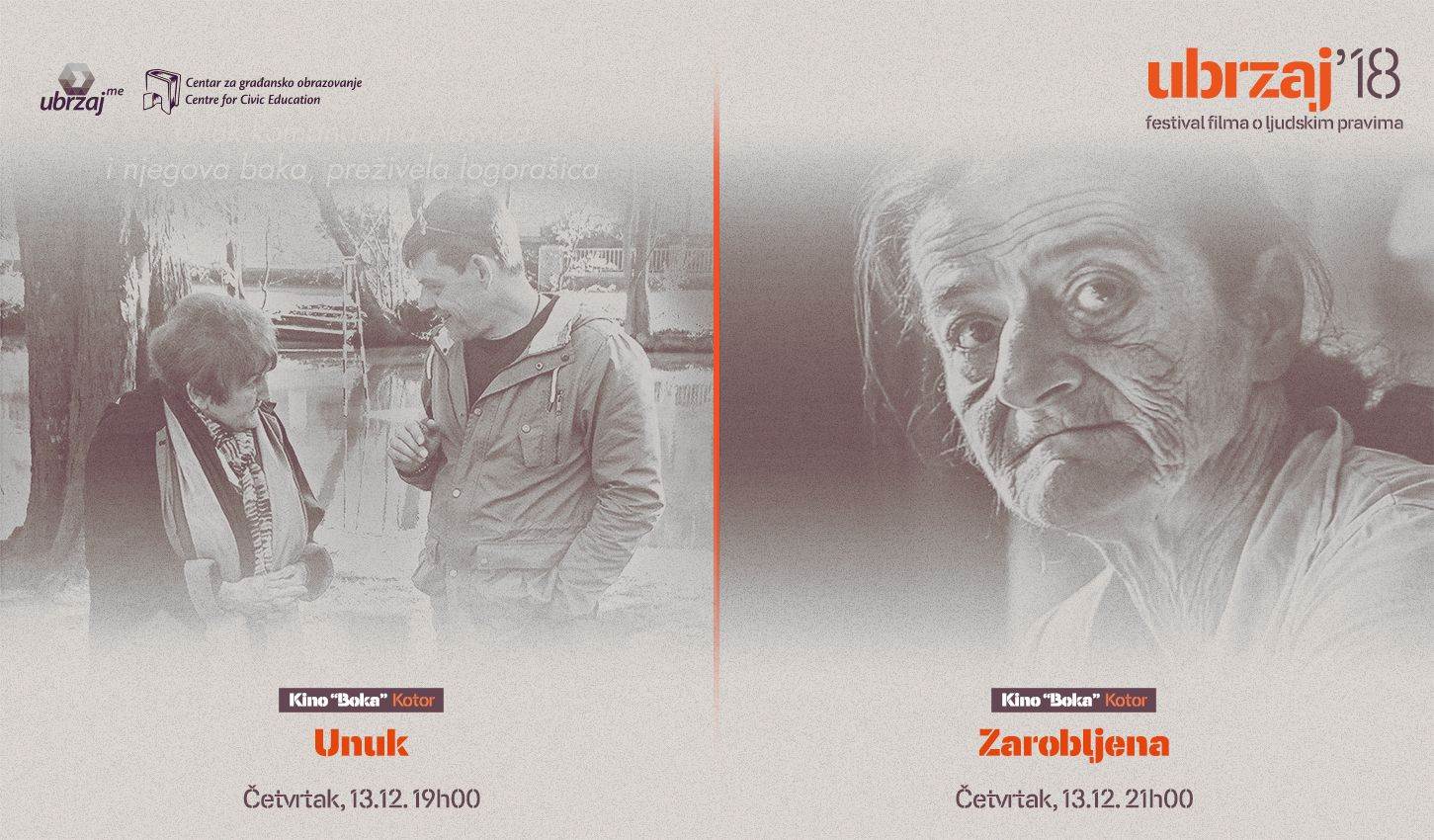 At 20:00h programme offers Hungarian film A Woman Captured by Bernadett Tuza-Ritter which reveals a shocking occurrence of modern slavery in contemporary society, in the heart of Europe, through destiny of protagonist Marish who lives for more than a decade as a slave of one Hungarian family.

FAST FORWARD Festival 2018 is organised from 10 to 14 December 2018with central programme in Podgorica in PI CIC ’Budo Tomovic’, with accompanying editions in Berane – 11 and 12 December in Centre for Culture and PI Gymnasium ’Panto Malisic’ and in Kotor – 13 and 14 December in Cinema ’Boka’. FAST FORWARD 2018 is being implemented with the support of European Union Delegation to Montenegro, Commission for Allocation of Part of Revenues of Games of Chance of Government of Montenegro and Ministry of Culture of Montenegro, as well as companies Metropolis, PG Taxi and Compania de Vinos Montenegro. Partners of Festival are PI CIC ’Budo Tomovic’, BELDOCS, Sarajevo Film Festival, CC ’Nikola Djurkovic from Kotor, Municipality of Kotor, Municipality of Berane, Centre for Culture of Berane and PI Gymnasium ’Panto Malisic’, and media sponsors are public service RTCG (TV and portal) and Vijesti (newspapers, portal and television).

Detailed programme of the Festival and all additional information are aavailable at the website http://ubrzaj.me/en/ and the entrance to all screenings, in all three cities is free of charge. The official video of the FAST FORWARD Festival 2018 is available at the link https://youtu.be/4vldv54owE4