The Centre for Civic Education (CCE) today presented findings of the public opinion survey about persons with disabilities, within the project For Equality of Persons with Disabilities, pointing to the further need for more systematic approach of the competent authorities in order to improve quality of life of this marginalized social group.

Zeljka Cetkovic, Coordinator of the Active Citizenship Programme in the CCE, stated that ’the first and dominant citizens’ associations with persons with disabilities (PWD) point to the still insufficient understanding of the PDW’s potential in our society, although there is considerable number of those who personally know or have had some experience with PWD.’

Majority of citizens (60%) are aware of the fact that there is an antidiscrimination legal framework related to the PWDs, with the indication that there is also one-quarter (25%) of respondents who still do not know about the laws that strictly prohibit discrimination against persons with disabilities. ’It is interesting to note that the majority of national minorities are among those who do not know about these laws, although it would be expected that national minorities are more interested and more familiar not only with their rights but also the rights of other minority groups in society’, assessed Cetkovic.

Almost half of citizens estimate that the position of persons with disabilities in Montenegro is the same as it was five years ago, while more than one-third see improvements.

When it comes to accessibility of facilities of importance for the daily functioning of PWDs, such as health institutions, post offices, residential buildings, cinemas, restaurants, citizens of Montenegro have divided standpoints As many as 50% of respondents believe that these facilities are not at all or not accessible to persons with disabilities, while on the other hand, 47% think that they are accessible or absolutely accessible. Also, the polarization of opinion was also expressed when assessing the accessibility of public areas for PWDs.

’It is recognized that PWDs in many important areas of life fail to exercise their rights as other citizens. This especially relates to possibility of promotion at work, employment and participation in sports and recreational activities, but it is also reflected in political activity and accessibility to cultural offer. Thus, over 70% of citizens estimate that PWDs do not have the same chances when it comes to employment and promotion at work, 69% of them find it difficult to pursue opportunities for participation in sports and recreational activities, i.e. slightly more than half (56%) find that they are restricted in political activity and access to cultural events. It is also concerning that the restrictions on PWD are still significantly visible within the educational process, especially timelines of opening the issue of inclusive education has been open,’ Cetkovic said.

She further explained that over 3/4 of the citizens stated that PWDs could be fully integrated into the community if the state and society were sufficiently engaged, which is a space for authorities to demonstrate more active approach in addressing barriers that PWDs face. However, as she stated, it is not only the responsibility of the authorities, because some of the benefits that the Government gives to improve the employment rate of PWDs are not accepted by all stakeholders. And this is recognized by the citizens, thus almost 2/3 of them think that employers would rather pay the state the necessary compensation than hire a disabled person.

The majority of citizens does not agree with the claim that the specifics and problems of PWD are solely the matter of their families and institutions, and almost 70% think that they should be given priority when employing. The majority of Montenegrin citizens (88%) believe that the state should provide more financial assistance to the PWD than it currently does, even if it would lead to higher budgetary expenditures.

The vast majority of Montenegrin citizens agree with the claim that PWDs have the same needs as other people, while three-quarters believe that PWDs can be as adequate and successful parents as persons without disabilities.

In general, Montenegrin citizens mainly have no prejudice towards persons with disabilities. An exception is the finding that about one-third of the respondents would not feel comfortable if someone in their family enters into a marriage with a person with disabilities.

“The findings indicate the need to do more to sensitize the citizens of Montenegro, that there is a basis for tolerance and acceptance of persons with disabilities, that citizens recognize discrimination against PWDs, but they obviously do not have enough information and knowledge, hence certain prejudices and social distances remain. The fact that citizens better evaluate the contribution of non-governmental organizations to improving the position of PWDs than the institutions of the systems to which this issue is part of the competence, is a warning to the institutions themselves, which obviously need to work harder, more systematically and more devotedly to ensure that PWDs have an equal chance in our society. We at the CCE hope that these findings will be one of the incentives for improving the systemic response to the need for full social inclusion of PWD and that the competent institutions will carefully analyse them,’ concluded Cetkovic. 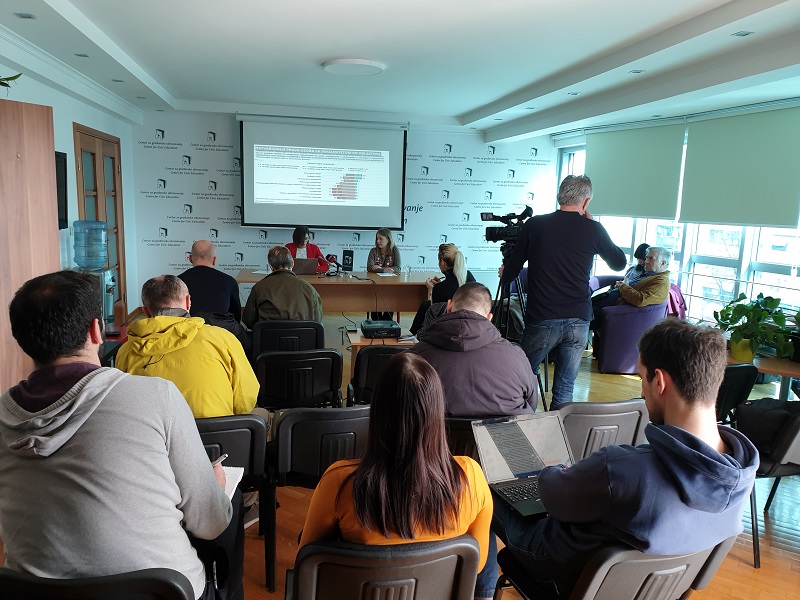 The expert and field part of the research was conducted from 14 to 24 February 2020 by agency Ipsos Strategic Marketing, using a three-stage random representative stratified sample, which included 17 cities in Montenegro. The total sample consisted of 801 adult respondents, with post-stratification which included indicators of gender, age, nationality and region.

The research is part of the project For Equality of Persons with Disabilities supported by the Ministry for Human and Minority Rights of the Government of Montenegro. The aim of the project is to contribute to increasing and improving the social inclusion of persons with disabilities in Montenegrin society, and one of its components is related to increasing the general public’s awareness of the human rights of persons with disabilities.