Centre for Civic Education (CCE), within the framework of the project Through Transitional Justice to Multiculturalism, presented findings of the public opinion survey on attitudes concerning wide range of transitional justice issues in Montenegro. The data reveal that citizens are aware of the 1990s wars but that they are not willing to speak specifically about these events even after a quarter of century, which is a consequence of deficiencies of education system, lack of dialogue and inadequate dealing with controversial issues from our recent past.

Detailed findings indicate that the majority (69%) of citizens believe that Montenegro participated in the 1990s wars at the territory of the former SFRY, 13% of them that it did not, while nearly one-fifth of citizens refused to answer this question. Moreover, even half of the citizens do not know or are not ready to name the culprit for these wars. Those who take different stance see primary responsibility on the then state leadership, i.e. the presidents of former republics.

He warned about harmful consequences of repression of the recent past, as well as politicization and manipulation. ’The vast majority of respondents cannot or do not want to assess the number of Montenegrin citizens who lost their lives in the attack on Dubrovnik. And of those who responded, most estimated that there were up to 50 victims. I remind that 165 Montenegrin citizens died in the attack on Dubrovnik. On the other hand, when it comes to the number of casualties during the NATO bombing of Montenegro, almost two-fifths of the respondents answered that question, with an average estimate of nearly 70 death people. During the NATO bombing, seven persons were killed in Montenegro – six Montenegrin citizens in Murino and one citizen of Serbia in military barrack in Danilovgrad,’ he explained.

Tamara Milas, Human Rights Programme Coordinator at the CCE, reflected upon perceptions about the performance of the judiciary in prosecuting war crimes. ’About one-quarter of citizens state that there have been war crimes trials in Montenegro, most often mentioning the case of ’Morinj’. It seems that none of the respondents remember one of the first prosecuted war crimes cases in Montenegro – assassination of family Klapuh, which ended with final conviction, nor the last one – Zmajevic case, who was sentenced to 14 years in prison for war crimes against the civilian population in Kosovo.’ 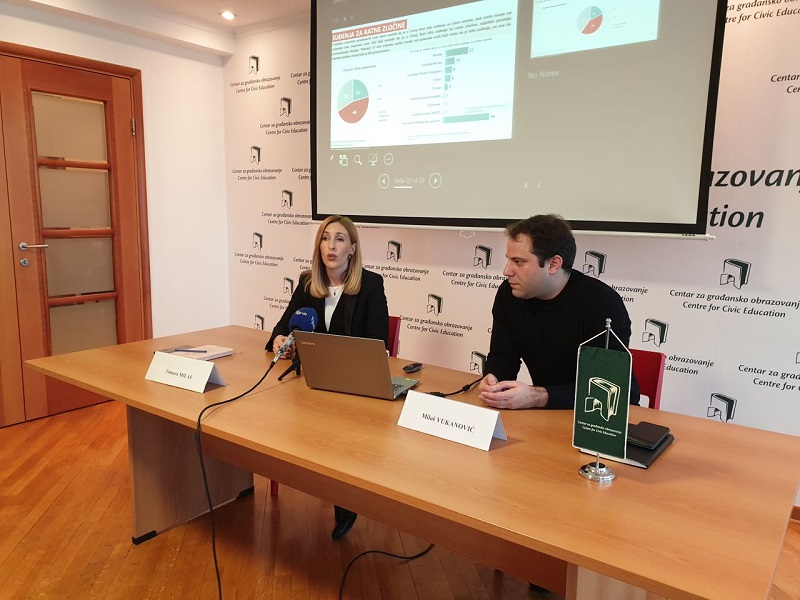 Milas assessed that it is a matter of concern dominant attitude that the Montenegrin judiciary lacks the capacity to prosecute war crimes.

’Most citizens recognize the importance of regional state cooperation in establishment of facts about war crimes in the territory of former Yugoslavia. In this context, it is expected that slightly more than a quarter heard of the RECOM Initiative. It is also encouraging that of those who are familiar with this regional initiative, as much as 78% support it,’ Milas emphasized.

When it comes to attitudes towards the past, the majority population believes that the state should open archives from the 90s, build memorials to victims of war crimes, and that facts about wars in the former Yugoslavia should be included in history books. Half agrees that Montenegro is obliged to pay compensation for damage caused by its citizens, and just over 2/5 that Montenegro needs to deal with the past.

Special segment of the survey referred to war propaganda for which quarter of citizens say that it was present during 1990s in Montenegro, and amongst the media that featured prominence in war propaganda reporting were RTCG and ’Pobjeda’, while some believe that all media at the time were engaged in war propaganda.

Slightly more than one-third of citizens state that anti-war movements and activists existed in Montenegro during the 1990s.

Most citizens formed their opinions about the 1990s wars on the basis of the experiences of people close to them or via media, while very few reported that they had acquired an opinion on these war through formal education, which is a data that requires deeper analysis.

Finally, when it comes to the current presence of transitional justice issues and related issues in media, Montenegrin public is divided. However, those who think that media do not pay enough attention to these areas are slightly prevailing (41% vs. 37%).

The expert and field part of the research was conducted by the Ipsos Strategic Marketing agency, from 14 to 24 February 2020, with application of three-stage random representative stratified sample that included 17 cities in Montenegro. The total sample consisted of 801 adult respondents, with post-stratification including indicators of gender, age, nationality and region. 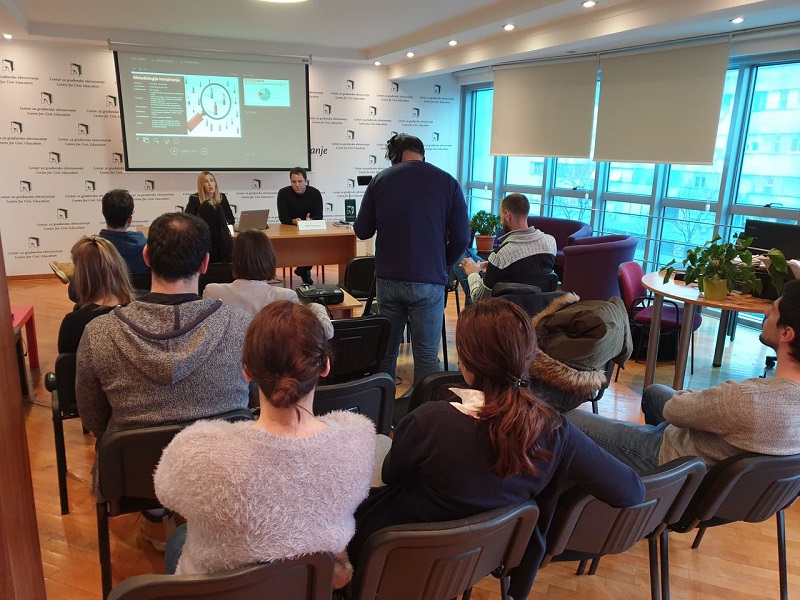 The survey is part of the project Through Transitional Justice to Multiculturalism supported by the Ministry for Human and Minority Rights of the Government of Montenegro. The project objective is to contribute to understanding of the concept of dealing with the past and affirmation of the principles of multiculturalism and interculturalism as the basis for establishing transitional justice and rule of law within Montenegrin society.