The Centre for Civic Education (CCE) has, within the framework of the project “Support to local media – first-hand stories! Support to investigative journalism and media literacy at the local level in Montenegro”, signed contracts with the media to which funds were awarded through competition, in the total amount of 53,202.29 EUR. Six local media projects were supported whose activities are focused on research and life stories, TV pieces, shows and articles from the local level, which are related to the process of Montenegro’s accession to the European Union in various aspects. 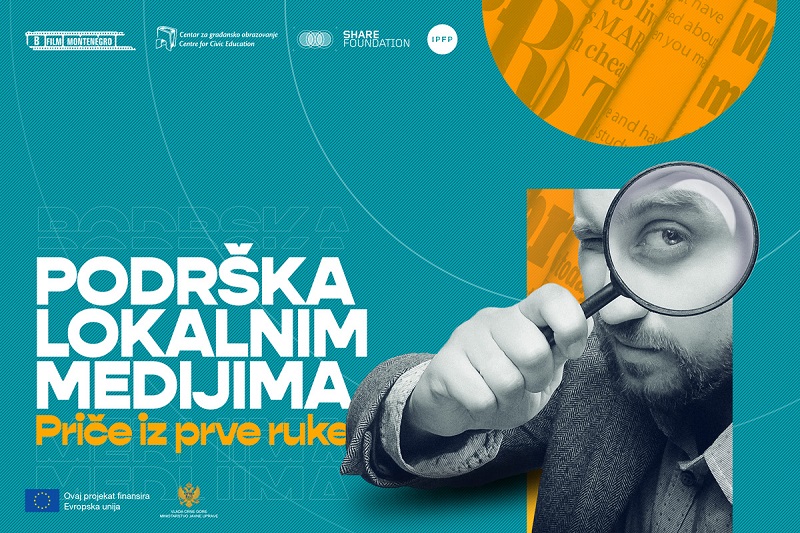 The following projects are supported:

On the occasion of signing of the contracts, Daliborka Uljarević, Executive Director of the CCE, stated that “the CCE hereby supports the efforts of local media to report on topics of interest to the local population, which have an impact on the whole society. I believe that these efforts of local media will contribute to raising public awareness of the importance of certain topics, but also of harmful habits at the local level.” She emphasized that “the media community has a responsibility for shaping public opinion, especially at the local level whereby it is possible with the aid of local media to influence the local governments to participate more actively in solving the problems of citizens.”

Dragan Popadić, the Director of the Radio Tivat pointed out that “In the time of populism, kitsch, superficiality and easily spoken words, professional journalism is like a lighthouse that helps ships not to hit rocks. However it is better to be without a lighthouse, than with fake ones that lead ships on the wrong course.” Popadić added that with the show about the sea, they want to shed light on some topics “in the hope that we will help the listeners to cope in this strange time”. He said that the cooperation between the media and the NGO sector is on the line of good intentions.

Milena Bubanja Obradović, the Editor of the portal Radio Berane assessed that “this type of support is in multiple manners important to local media, primarily because it provides financial and logistical support for the implementation of the project which is envisaged based on needs of local communities and journalists working in them.”

Vuk Ilić, the Director of the Radio Jadran emphasized that “national, religious, political and other beliefs and feelings mask and marginalize the importance of the story and actions of an ecological Montenegro, especially in the context of European integration and Chapter 27, and this competition enables the identification of local public policies and practices in the Bay of Kotor. With our project, we will point out the violation of regulations and encourage the authorised and powerful stakeholders to become responsible for the situation in this area. “

Mustafa Canka, Editor-In-Chief of the portal Ul Info, said that their project will enable “keeping the focus of the public on two major topics – Solana and the K1 case, which is of great economic, social and environmental importance not only for the municipality of Ulcinj, but also for Montenegro.”

Vladan Đurišić, the Editor-In-Chief of the Voice of Zabjelo portal, stated that “each local community is specific in its expression, but sometimes it is also neglected as the smallest part of the overall social mosaic, so it is important for a community to have capable and dedicated local media that will draw attention to the needs of its members”, expressing confidence that their project will be a contribution in that direction.

Milica Petričević, Project Manager at the Radio Krš, assessed this support to small organizations as being an important one. “We believe that a number of our journalists will successfully realize their first investigative stories, with quality mentoring and a comprehensive working principle, and thus make significant progress in their journalistic careers,” she said.

A capacity building programme has been implemented for supported local media to successfully implement these projects following with European rules. Besides, they are provided with legal support for the interpretation of the legal framework when applicable, as well as legal advice to ensure that their journalistic pieces are in line with the existing legislative framework and the Code of Journalists of Montenegro.

Project “Support to local media – first hand stories! Support for investigative journalism and media literacy at the local level in Montenegro”, is conducted by B film Montenegro, the Centre for Civic Education (CCE), the SHARE Foundation and the Institute for Business and Financial Literacy. The project is funded by the EU via the Delegation of the European Union to Montenegro and co-financed by the Ministry of Public Administration of the Government of Montenegro.