On the occasion of the International Day of Nonviolence – 2 October, the Centre for Civic Education (CCE) points on the obligation of all in the society to make an influence for the preservation of the culture of coexistence, peace and dialogue, with the obligation of competent institutions to indiscriminately and severely sanction any form of violent behavior. 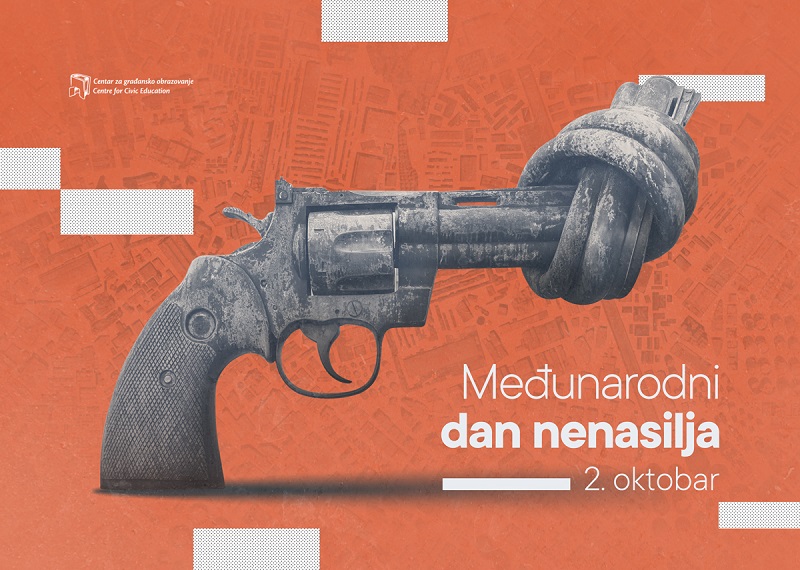 Today, Montenegro is facing negative tendencies that deeply divide an already far too divided society. It is clear that many decision-makers have been dishonest in their rhetorical commitment to tolerance and the rule of law, and that particular calculations come first. In the last few years, we are witnessing unpleasant events in some Montenegrin municipalities, which are characterized by nationalist expressions and outbursts of hatred towards others, the devastation of cultural and historical assets, physical confrontations between citizens due to political and ideological differences, etc. Partly, this is a consequence of the legacy of systemic oblivion and the absence of building a culture of peace, with the strengthening of radicalism and extremism, which justifiably upsets the public.

CCE points out that the holders of political power, primarily from the government, but also from the opposition, are responsible for all this. Of particular concern is the absence of indiscriminate condemnation and more efficient prosecution of all those who incited violence or hatred towards a group or a member of a group determined based on religion, origin, nationality, or other personal characteristics.

Breaking down the walls of nationalism and fascism, encouraging common sense and impartialness, expertise, principles and reconciliation, coexistence, tolerance, respect and economic prosperity should be the framework of every citizen of Montenegro. Long-term and sustainable overcoming manifestations of violence require coordination and work of numerous social actors.

CCE believes that education on human rights and peacefull and non-violent problem solving is crucial in establishing a culture of non-violence. Since its establishment, the CCE has been committed to the promotion of universal human rights and through its programs continuously works on educating citizens to take an active approach in advocacy and practice of non-violent ways of resolving conflicts.

The United Nations (UN) General Assembly, established in 2007, by the resolution,  2 October as the International Day of Nonviolence and an opportunity to “spread the message of nonviolence”, reaffirming the “universal importance of the principle of nonviolence”. International Nonviolence Day is celebrated on the birthday of Mahatma Gandhi, one of the leaders of the movement for Independence of India and the founder of the philosophy and strategy of nonviolent resistance. Gandhi’s principles of non-violent struggle for the realization of civil, political, economic and all other guaranteed rights have inspired many people to contribute to the development of freedom and democratic society.