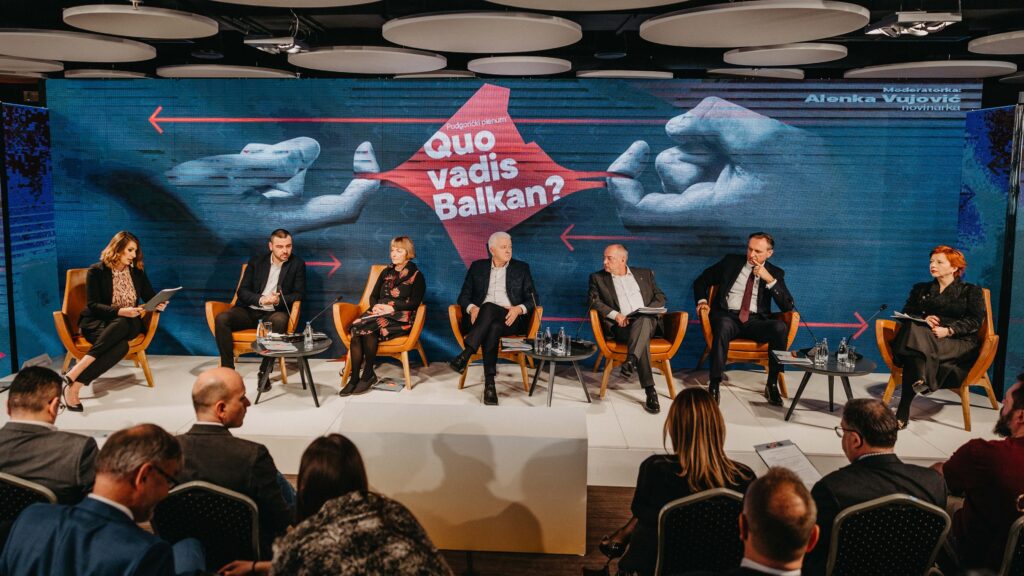 Josip Juratović, MP in the German Bundestag, assessed that the situation in the region is worrying. “It is very important that at this moment, in which Montenegro finds itself, nationalism does not prevail, but that Montenegro continues on its path to the EU and that is where it needs help”, he said. Juratović expressed pessimism when it comes to B&H. “When people ask me after 26 years of war – will there be a war, it is a kind of bankruptcy, but not only for politics in B&H, but also for the international community that is active there”, he explained. He also referred to the blockade of EU negotiations with Northern Macedonia, through relations with Bulgaria. “In a situation where one radical party of one member state decides on the future of Europe, I think that that kind of Europe is no longer worth the paper on which it is written”, he said, noting that a way must be found to prevent one radical nationalist party from blocking further EU development, while advocating confederalism. “It is important for Europe to show its backbone, and Europe cannot survive without social democracy, as the Social Democrats have been its backbone throughout the history of the European Union’s democratic movement”, he concluded.

Ranko Krivokapić, Honorary President of the Social Democratic Party (SDP) and former President of the Parliament of Montenegro, pointed out that Montenegro is a country of the left. “Small countries are by definition countries of solidarity and social justice. Only in this manner can they survive and be sustainable and stable. That leftist idea was a modus operandi even in the periods when it was not something that could be defined as social democracy”, said Krivokapić. He believes that “the main problem of the left in the Balkans today is the fight against nationalism”, pointing out that “in order to preserve power, it has been entered into nationalism in the Balkans”.

Duško Marković, a MP of the Democratic Party of Socialists (DPS) and former Prime Minister of Montenegro, considers that, in a political sense, Montenegro has regressed. “Unfortunately, such a situation is not immanent to a full-fledged NATO member and, until recently, the most advanced country in negotiations with the EU. This is unacceptable for the political, democratic and civic consciousness that needs to be awakened and give a strong response to that”, said Marković, assessing that “social democracy is in crisis, but not only in Montenegro and the region, but also the EU, which is also seeking the best possible response to stop the erosion of democratic values”. Marković stated that Montenegro made its modest successes precisely for the reason of inheriting the values of social democracy. “Today, social democracy in Montenegro is threatened by some parties and individuals who permanently create instability, as well as the growing populism that political parties and actors bear in their actions”, he said, expressing confidence that social democracy will find an answer to nationalism and populism. 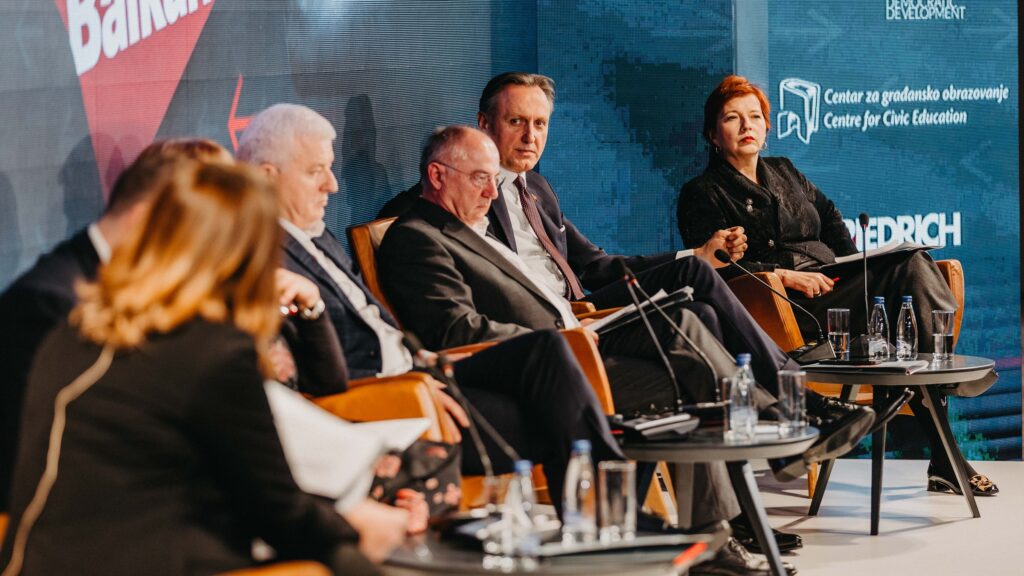 Vesna Pusić, former Deputy Prime Minister and Minister of Foreign Affairs of the Republic of Croatia, assesses that genuine democracies have at least two equal political groups that take turns in power, which creates the possibility of controlling the government. “This will not happen in our region without social democracy, which has not yet found its identity and themes”. According to her, social democracy in the region bears the burden of a failed transition from the League of Communists, on the one hand, and public disqualification as former communists and Yugoslav nostalgics, on the other. “Education is a burning political issue for our region, which the left centre has let slip from their hands, while the centre-right and the church have not”, she said, emphasizing the importance of the concept of solidarity in terms of the awareness that there is context, problems and society. Commenting on the political scene in the region, she stated that politicians have lost themselves in the need to please everyone. “We are a region of missed opportunities. There were many chances for a positive shift of countries and the region. We did not build on them, so identifying positive points in the region with the possibilities of upgrading should be the goals of the Social Democrats”, said Pusić.

Nataša Vučković, Executive director of the Center for Democracy Foundation from Serbia and former MP of the Democratic Party in the Serbian Parliament, reminded that “social democracy was determined by its attitude towards the economy, it offered answers through public policies, social and education policy, solidarity“. She stated that “today, the Social Democratic parties do not have a position on key issues”. Furthermore, she assessed that “the social democratic parties in the Balkans were the bearers of the pro-European idea, and today that narrative is being set aside”.

Saša Magazinović, a member of the Parliamentary Assembly of Bosnia and Herzegovina, sees populism, the race for votes and the abandonment of values as key problems for social democracy in the region. “Values cannot and must never be negotiated. The values on which social democracy is based must be built into the foundation of every social democratic party in the region. It is discouraging that the EU institutions have recently shown that they are ready to give up European values when talking and negotiating in the Balkans. Our countries want to become part of the EU and we must value European values, not trade them”, concluded Magazinović. 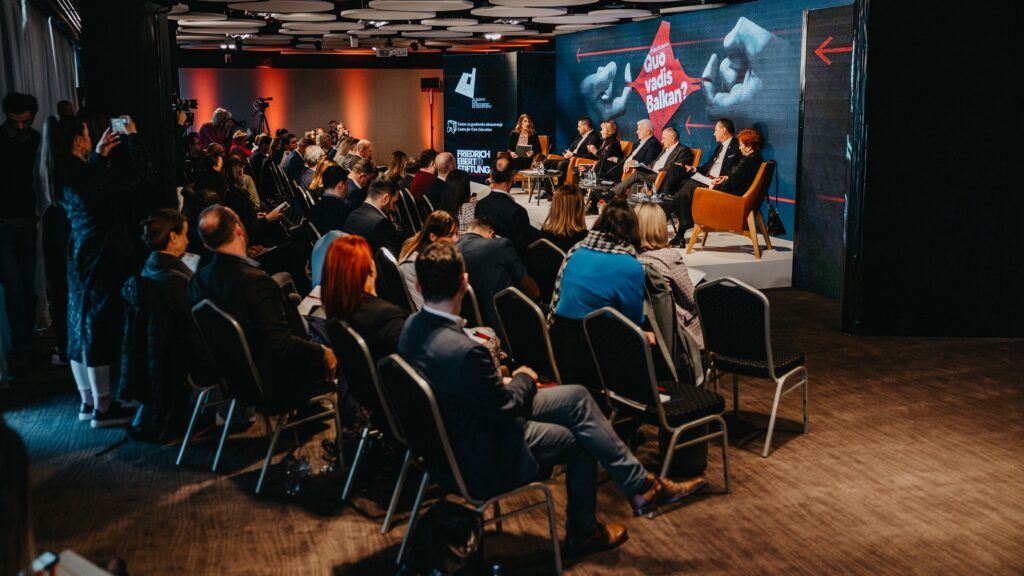 During the discussion, among other issues, the panelists reflected on the Open Balkans initiative. Duško Marković stated that this is a political initiative that comes from those who did not want to use the mechanisms of CEFTA, as well as that he does not believe in that project. Juratović added that he considers that the Berlin process should continue, and that the Open Balkans is the political narrative of Aleksandar Vučić, the President of Serbia.

“Podgorica Plenum – Quo Vadis Balkans?” aims to strengthen the progressive forces in the region through gatherings and talks on modalities to respond to the growing right-wing extremism in the region. The plenum brought together app. 50 participants from political parties, NGOs, the media, institutions, academia and the diplomatic corps, in compliance with epidemiological measures.