In the framework of the call for presidential elections and the announced extraordinary parliamentary elections, the Centre for Civic Education (CCE) has published the Election guide, by Nikola Mugoša, PhD, president of the State Election Commission (SEC). 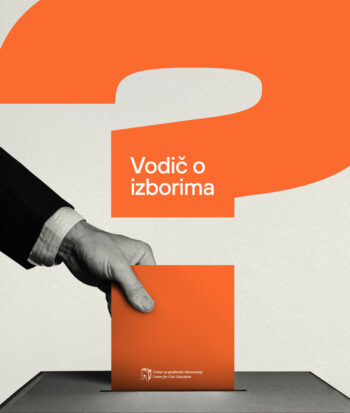 It is the first Election guide in which an overview of all relevant issues of Montenegrin electoral legislation is given in an informative manner, with a practical overview of the rights and obligations of all parties in the electoral process. It is intended for voters, entities participating in the election process, observers, the media, but also for everyone else who is interested in learning more about the election process in Montenegro. It is available in Montenegrin, Albanian and English, in print and electronic versions.

The Guide consists of three parts.

The first one refers to the elections for MPs and councillors, that is, it gives answers to the questions of who has the right to vote and be elected and what is covered by the right to vote. It also provides an insight into the voting procedure, emphasizing the rights and obligations of voters, but also of political subjects, that is, their candidates, who participate in the elections.

In the second part the details concerning the presidential elections, which are scheduled for 19 March, are elaborated. Thus, citizens will have the opportunity to remind themselves and refresh their knowledge about the process of electing the President, but also new voters will have the opportunity to become familiar with the procedure for electing the President of the state in a clear and simple manner and, among other things, to find out who has the right to be elected President, what is necessary to carry out a proper candidacy and what is the process and, of course, a little more about how the  President gets to be elected.

The third part refers to the rights that are defined by the Law on the Electoral Registry, including requests for changes in the electoral registry and situations in which they are justified, as well as requests for inspection of the electoral registry, when by whom and in what way it is allowed, and the competences and the actions of the Ministry of the Interior in these situations.

Furthermore, the presentation of electoral rolls and candidates in the media, as well as the position of domestic and foreign election observers, are addressed as cross-cutting issues.

The answers to all questions are presented without being burdened with legal finesse, and in order to be as simple as possible for use and understanding by the end users for whom it is intended, as the author of the Guide explained.

CCE reminds that the President of the Parliament, Danijela Đurović, yesterday announced the Presidential Elections for 19 March 2023. Extraordinary parliamentary elections are also expected to be held in the first half of this year, noting that this is also part of the strong recommendations of Montenegro’s pro-Western partners in order to resolve the ongoing political crisis.

In that context, this Election guide, as a concise and meaningful cross-section of all aspects of the election process, represents a contribution of the CCE and the author to facilitate the understanding and implementation of all electoral actions, which is especially important in an atmosphere of raised tensions.